Blackwell’s review: Record of a Spaceborn Few, by Becky Chambers 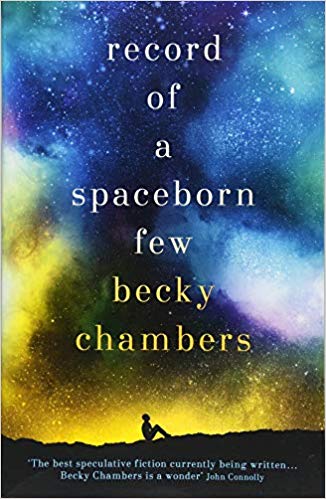 This review was written by Lat Lea, a Blackwell’s bookseller in Oxford

Record of a Space Born Few – This novel by Becky Chambers is the third of three novels (the first is the Kitschies Golden Tentacle-shortlisted A Long Way to a Small Angry Planet and the second is A Closed and Common Orbit)  set in the future, in a fictional universe  that Chambers calls the “Galactic Commons”, i.e. our galaxy and the name of the vast alliance that loosely governs the known intell1gent species in the galaxy.  There are 10 of those, including human beings. Most are technically more advanced, more populous and more powerful than humans.   These other species are a range of physical types, roughly corresponding to various “lower” species on earth, molluscs, crustaceans, insects, birds, apes and so on.   The history of the Solar System is gradually gleaned from the three novels:  as the ecology on Earth declined, wealthy people colonized Mars and partly terra-formed it, whereas those remaining on the home planet eventually built a fleet of spaceships, the Exodus Fleet, and set forth for parts unknown.   At the beginning of the series, humans have been accepted into the Galactic Commons and are gradually spreading out into the galaxy, integrating themselves into the diverse worlds and societies that comprise the “Commons”.

Becky Chambers is astonishingly inventive and more than any other science fiction novelist that I have read, she manages to address the physical, cultural and social implications of her universe.  Plus she has written three novels with quite different plots and themes that nevertheless develop her main idea:  what it means to be tolerant and coexist with other species.  All that could be read as a blue print for future co-existence and tolerance of different races and religions in our current situation.  She considers the technical challenges of communicating across species as well as cultural challenges and she even considers the implications of inter-species sex and love.  That can be seen as an analogy to contemporary concerns about non-gendered sexuality and LBGT issues.  (One glib reviewer called the first novel “science fiction for the Tindr generation”.)   On top of that, one of the other themes is whether AIs are human. In the GC (although they are illegal) it’s possible for an AI to obtain a body.   Can one love an AI especially after it’s in a body, and what is its gender?

In addition, Becky Chambers explains plausibly and in practical terms a range of technical and scientific questions that any future technology will have addressed.   There are many invented basic technologies, “dent bots” as well as more complex ones, e.g. various forms of interstellar travel and types of spaceships.   All of these are carefully thought through.  Thank goodness:  no fantasy mumbo jumbo in these novels.

This particular novel is set on one ship in the Exodus fleet and is probably the most domestic novel of the three.  It opens with a large explosion on one of the ships in the fleet and then describes the period leading up to the explosion. There’s a family, mother, Tessa, mostly off-ship father, George two boys and small girl. Plus, grandad AKA Pop.  The eldest boy, Kip, is on the cusp of adolescence and accordingly rebellious.  He’s unsure of his future, like anyone his age, but also because the “traditional” society of the Exodus fleet is no longer the only option available to people on the fleet.  They can leave and the fleet is no longer going anywhere; it’s a habitat in space circling around.   Another character, Eyas, is a caretaker, who manages funerals and the disposal of dead bodies, a significant issue on a spaceship.  Plus, there’s Isabel, an elderly archivist on board the ship who is tasked with hosting a Harmagian scholar (a slug like species) who is researching life on the Exodus fleet as a sociologist or anthropologist.  There is also Sawyer, a young man trapped in a dead-end job on a multi-cultural planet who tries to join the fleet, because his family came from it a generation previously, and he believes it will offer him a better, more complete life.

Thus, Record of a Sapce Born Few is about a range of characters, grappling with family life, job responsibilities, aging, living in the same space for generation in a static society, ambition, education and how best to live a good life.  It’s a gentle novel, but then, all three novels are suffused with kindness and sensitivity.

Read it for those qualities but also for the exceptional imagination of Becky Chambers, who uses her Galactic Commons to create an intensely plausible but different future.