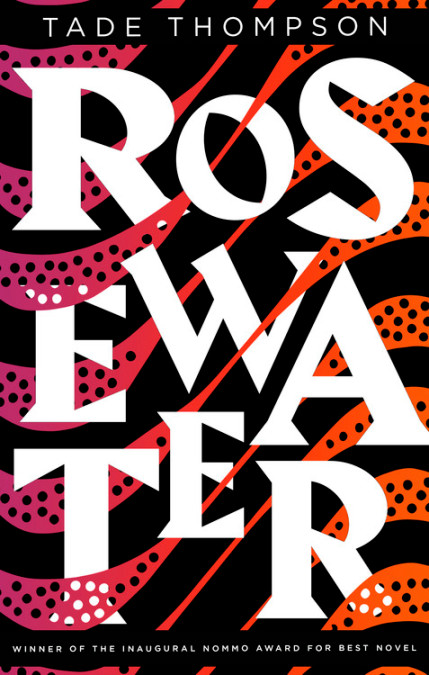 This review is from Euan Hirst, Chief online bookseller for our lovely sponsor Blackwell’s.

Rosewater takes place in Nigeria in the middle of this century. Written in the first person, it jumps back and forth between the childhood, early adult years and maturity, (2032-2066), of the main character, Kaaro. He is a sensitive and able to track people and read minds, due to his interaction with xenomorphs (Greek/Latin neoplasm) that emanate from an alien who first lands in Hyde Park in London and is attacked by the locals. For that read “little Englanders” in a nice topical reference. The alien gets the message and moves himself on to Nigeria.

Rosewater is a settlement in Nigeria that grows up around the alien’s spaceship/dwelling because of the healing properities of xenomorphs that are dispersed once a year in a great outpouring from the alien’s spaceship dwelling, and also dispersed more generally. It is firstly a shanty town and eventually a developed city. The plot revolves around the Kaaro’s early life and then the work he does for a secret police/intelligence agency of the Nigerian government, especially his and the agency’s interaction with the alien.

Rosewater also includes a number of tropes from from crime and thriller fiction: paranoid governments concerned to maintain their own authority, clandestine government agencies with their own agendas, rogue agents within those agencies, plus supra legal behaviour, occasional violence, and universal corruption among regular departments of the government, the ordinary police, the army, elected politicians, members of the business community (Kaaro’s father), gangsters, common thieves and so on. There is even a friendly dog and a salt-of-the earth snack bar owner.

Kaaro is a wise-cracking protagonist, an anti-hero, who claims to be out for himself, but somehow always ends up loosely allied with the good guys, usually, although not always non-governmental characters, and in conflict with the obvious bad guys, usually governmental. His characterisation is also in a crime and thriller tradition of the lone agent, the private eye, cynical and appalled by human behaviour, but nevertheless compelled by an innate morality to act more or less decently.

Kaaro’s banter and jokes are funny and that humour helps enrich the novel and separate it from many thrillers and much science fiction. The author Tade Thompson is of mainly Yoruba descent and so is Kaaro. The context of the novel is almost entirely Nigerian and there are numerous references to tribal affiliation and also jokes and generalizations about some of the other better known ethnic groups in Nigera, for instance Hausa and Igbos. These all seem to presume a local knowledge and a culture that Nigerians will understand and enjoy more than others, but they are non-specific enough that they will be appreciated by any reader. This is the most original aspect of Rosewater. It’s set in Nigeria; it’s about Nigeria and it’s about Nigeria’s future. Except for some popular music, it doesn’t make much of an attempt to include references from Western culture. Aside from the episode in London, it only mentions one other country, the United States, which has built a very high wall around its entire border to exclude the alien and its xenomorphs. Another nicely topical reference.

Rosewater is the first part of a trilogy that is a well nurtured commercial project. Nevertheless setting it in Nigeria, creating a smart aleck protagonist from a different type of genre fiction, and its general witty tone mark it as exceptionally original, and separate from the pack of much other science fiction.